Genus Oryza: All kinds of rice


GENUS ORYZA: All kinds of rice

a- Oryza genus in the modern scientific classification 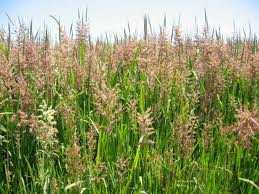 A kind of wild rice
-The Tribe Oryzeae: This tribe also forms subfamily Oryzoideae (13 genera).
Chikusichloa, Hydrochloa, Hygroryza, Leersia, Luziola, Maltebrunia, Oryza, Porteresia, Potamophila, Prosphytochloa, Rhynchoryza, Zizania,Zizaniopsis.
-The Genus Oryza is a genus of seven to twenty species (depending on many different systems) of rices or grasses in the tribe Oryzeae, within the subfamily Bambusoideae, native to tropical and subtropical regions of Asia, Northern Australia and . They are tall, wetland grasses, growing to 1–2 m tall; the genus includes both annual  and  perennial species. 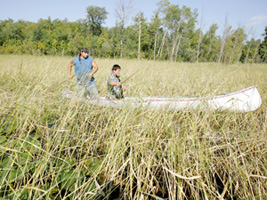 Harvesting wild rice
Oryza is situated within the tribe Oryzeae, which is characterized morphologically by its single-flowered spikelets whose glumes are almost completely suppressed. In Oryza, two sterile lemma simulate glumes. The tribe Oryzeae is within the subfamily Bambusoideae, a group of Poaceae tribes with certain features of internal leaf anatomy in common. The most distinctive leaf characteristics of this subfamily are the arm cells and fusoid cells found in their leaves. The Bambusoideae are in the family Poaceae, as they all have fibrous root systems, cylindrical stems, sheathing leaves with parallel-veined blades, and inflorescences with spikelets.
While USDA plants lists have only seven species, others have identified up to 17 or over, including sativa, barthii, glaberrima, meridionalis, nivara, rufipogon, punctata, latifolia, alta, grandiglumis, eichingeri, officinalis, rhisomatis, minuta, australiensis, granulata, meyeriana, and brachyantha.
One species, Asian rice (O. sativa), provides 20% of global grain and is a food crop of major global importance. The many species mentioned above are divided into two subgroups within the genus (wild and planting rice). 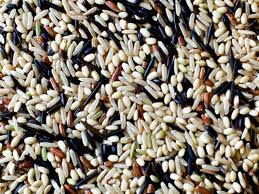 Colors of some wild rice grains

Rice is central to the lives of billions of people around the world. Possibly the oldest domesticated grain (~10,000 years), rice is the staple food for 3.5 billion people and growing rice is the largest single use of land for producing food, covering 9% of the earth's arable land. Rice provides 21% of global human per capita energy and 15% of per capital protein . Calories from rice are particularly important in , especially among the poor, where it accounts for 50-80% of daily caloric intake. As expected, Asia accounts for over 90% of the world's production of rice, with , and producing the most . Only 6-7% of the world's rice crop is traded in the world market. , , and the are the world's largest exporters. The produces 1.5% of the world's rice crop with , and producing 80% of the rice crop.
85% of the rice that is produced in the world is used for direct human consumption . Rice can also be found in cereals, snack foods, brewed beverages, flour, oil, syrup and religious ceremonies to name a few other uses.
Rice belongs to the genus Oryza and has two cultivated and 22 wild species. The cultivated species are Oryza sativa and Oryza glaberrima. Oryza sativa is grown all over the world while Oryza glaberrima has been cultivated in for the last ~3500 years . Rice is grown under many different conditions and production systems, but submerged in water is the most common method used worldwide. Rice is the only cereal crop that can grow for long periods of time in standing water. 57% of rice is grown on irrigated land, 25% on rainfed lowland, 10% on the uplands, 6% in deepwater, and 2% in tidal wetlands . The flooded rice paddy is a field of aquatic biodiversity, providing a home for fish, plants, amphibians, reptiles, mollusks, and crustaceans, which many of can be used as a means to incorporate protein into the diets of poor and malnourished people in low and middle income countries that farm rice .
Just as rice can be grown in many different environments, it has many characteristics, making one variety more popular in one region of the world than another. Rice can be a short, medium or long grain size. It can also be waxy (sticky) or non-waxy. Some rice varieties are considered aromatic. Rice also comes in many different colors including brown, red, purple and black .
With that brief introduction to rice, we encourage you to explore Gramene's Doorway to Oryza to learn many more specific details about this versatile and very important grass species.
References:
1-Oryza sativa- From Wikipedia, the free encyclopedia
2-Gramene Statistics and Queries for Oryza.
3. IRRI, 2001. Rice Research and Production in the 21st Century.
4. Chaudhary, R., et al., eds., 2001. Speciality rices of the world. Science Publishers, Inc, NH, .
5-International Year of Rice, 2004. "Rice and human nutrition" [PDF] factsheet.