The rice in North Korea 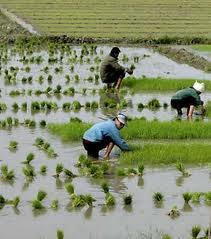 with the officially full name the Democratic People's Republic of Korea (DPRK), is a country in East Asia, occupying the northern half of the . Its capital and largest city is . The Korean Demilitarized Zone serves as the buffer zone between and . The Amnok, or Yalu, and the Tumen rivers form the border between and . A section of the in the far northeast is the border with .

The geography of North Korea

+Location
occupies the northern portion of the , lying between latitudes 37°- 43°N, and longitudes 124° -131°E. It covers an area of 120,540 km2  (46,541 sq mi). shares land borders with and to the north, and borders along the Korean Demilitarized Zone. To its west are the Yellow Sea and Korea Bay, and to its east lies across the  (East Sea of Korea).
+Area
-Total: 120,540 km2 (98th) ~46,528 sq mi.
-Water: 4.87%.
+Terrain
About 80% of land area is moderately high mountains separated by deep, narrow valleys and small, cultivated plains. The remainder is lowland plains covering small, scattered areas.
The highest point in is  at 2,744 m (9,003 ft).
The longest river is the which flows for 790 km (491 mi).
+Climate
has a continental climate with four distinct seasons.
-Long winters bring bitter cold and clear weather interspersed with snow storms as a result of northern and northwestern winds that blow from . Average snowfall is 37 days during the winter. The weather is likely to be particularly harsh in the northern, mountainous regions.
-Summer tends to be short, hot, humid, and rainy because of the southern and southeastern monsoon winds that bring moist air from the . Typhoons affect the peninsula on an average of at least once every summer.
-Spring and autumn are transitional seasons marked by mild temperatures and variable winds and bring the most pleasant weather. Natural hazards include late spring droughts which often are followed by severe flooding. There are occasional typhoons during the early fall.
Most of the country is classified as type Dwa in the Köppen climate classification scheme, with warm summers and cold, dry winters. In summer there is a short rainy season called changma.
+Cities
-Capital: .
-Other cities: Hamhung, , , Nampo, , and .
-Subdivisions: Nine provinces; two province-level municipalities (Pyongyang, Nasun, also known as Najin-Sonbong free trade zone); one special city (Nampo), 24 cities.

+The
The was first populated by peoples of a Tungusic branch of the Ural-Altaic language family, who migrated from the northwestern regions of . Some of these peoples also populated parts of northeast.

+ and immediate division (1945 -1948)
-Independence: August 15, 1945.
-Korean liberation from Japan (September 9, 1948)-establishment of the Democratic People's Republic of Korea (D.P.R.K., or North Korea) marking its separation from the Republic of Korea (R.O.K., or South Korea).
-The immediate division: It was divided into Soviet- and American-occupied zones in 1945, after the end of World War II. The surrender of in August 1945 led to the immediate division of into two occupation zones, with the administering the area south of the 38th parallel, and the administering the area to the north of the 38th parallel. This division was meant to be temporary until the , , Soviet Union, and could arrange a trusteeship administration.
Elections were held in the South under UN observation, and on August 15, 1948, the Republic of Korea (R.O.K.) was established in the South. Syngman Rhee, a nationalist leader, became the Republic's first president.
+The Democratic People's Republic of  (DPRK) appearance
On September 9, 1948, the North established the Democratic People's Republic of Korea (D.P.R.K.) headed by then-Premier Kim Il-sung, who had been cultivated and supported by the .
North and each claimed sovereignty over the whole , which led to the Korean War of 1950. The Armistice Agreement of 1953 ended the fighting; but the two countries are officially still at war against each other, for a peace treaty was never signed. Both states were accepted into the United Nations in 1991.
+Government
-Type: Highly centralized communist state.
-Political party: Korean Workers' Party (Communist).

+Before 2000
has an industrialised, near-autarkic, highly centralized command economy. The Central Planning Committee prepares, supervises and implements economic plans, while a General Bureau of Provincial Industry in each region is responsible for the management of local manufacturing facilities, production, resource allocation and sales.
's isolation policy means that international trade is highly restricted. passed a law in 1984 allowing for foreign investment through joint ventures, but failed to attract any significant investment.
In 1991, it established the Rason Economic Special Zone, in an attempt to attract foreign investment from  and . Chinese and Russian companies have purchased rights to use the ports at Rason. Chinese investors are renovating a road from Rason to , and Russian railway workers are renovating the railway from Rason to , from where it continues onto the Trans-Siberian Railway.
In the 1990s faced significant economic disruptions, including a series of natural disasters, economic mismanagement and serious resource shortages after the collapse of the Eastern Bloc. These resulted in a shortfall of staple grain output of more than 1 million tons from what the country needs to meet internationally accepted minimum dietary requirements. The North Korean famine known as "Arduous March" resulted in the deaths of between 300,000 and 800,000 North Koreans per year during the three year famine, peaking in 1997. The deaths were most likely caused by famine-related illnesses such as pneumonia, tuberculosis, and diarrhea rather than starvation.
Until 1998, the United Nations published HDI and GDP per capita figures for North Korea, which stood at a medium level of human development at 0.766 (ranked 75th) and a GDP per capita of $4,058.
+The period 2000-2010
The average salary was about $47 per month in 2004. The average official salary in 2011 was equivalent to $2 per month while the actual monthly income seems to be around $15 because most North Koreans earn money in illegal small businesses: trade, subsistence farming, and handicrafts. The illegal economy is dominated by women because men have to attend their places of official work even though most of the factories are non-functioning. It is estimated that in the early 2000s, the average North Korean family drew some 80% of its income from small businesses that are legal in market economies but illegal in .
According to estimates from 2002, the dominant sector in the North Korean economy is industry (43.1%), followed by services (33.6%) and agriculture (23.3%).
In 2004, it was estimated that agriculture employed 37% of the workforce while industry and services employed the remaining 63%. Major industries include military products, machine building, electric power, chemicals, mining, metallurgy, textiles, food processing and tourism. Iron ore and coal production are among the few sectors where North Korea performs significantly better than its southern neighbour – the DPRK produces about 10 times larger amounts of each resource.
In 2005, was ranked by the FAO as an estimated 10th in the production of fresh fruit and as an estimated 19th in the production of apples. It has substantial natural resources and is the world's 18th largest producer of iron and zinc, having the 22nd largest coal reserves in the world. It is also the 15th largest fluorite producer and 12th largest producer of copper and salt in . Other major natural resources in production include lead, tungsten, graphite, magnesite, gold, pyrites, fluorspar, and hydropower.
In the 21st century, 's GDP growth has been slow but steady, although in recent years, growth has gradually accelerated to 3.7% in 2008, the fastest pace in almost a decade, largely due to a sharp growth of 8.2% in the agricultural sector

-Agriculture
Products-rice, corn, potatoes, soybeans, cattle, pigs, pork, and eggs.
Agriculture was 20.9% of GDP as of 2009, although agricultural output has not recovered to early 1990 levels. The infrastructure is generally poor and outdated, and the energy sector has collapsed.
-Mining and manufacturing
Military products, machine building, electric power, chemicals, mining (coal, iron ore, limestone, magnesite, graphite, copper, zinc, lead, and precious metals), metallurgy, textiles, food processing, tourism.
North Korean industry is operating at only a small fraction of capacity due to lack of fuel, spare parts, and other inputs.
-Trade (2010)
-Exports = $2.557 billion: minerals, metallurgical products, manufactures (including armaments), textiles, agricultural and fishery products. The D.P.R.K. is also thought to earn hundreds of millions of dollars from the unreported sale of missiles, narcotics, and counterfeit cigarettes and currency, and other illicit activities.
-Imports = $3.529 billion: petroleum, coking coal, machinery and equipment, textiles, grain.
-Major trading partners (2009): (1) , (2) R.O.K., (3) , and (4) .
In most cases, the figures used above are estimates based upon incomplete data and projections.

experienced a severe famine following record floods in the summer of 1995 and continues to suffer from chronic food shortages and malnutrition.
Korean cuisine is largely based upon rice, vegetables, and meats. Traditional Korean meals are noted for the number of side dishes (banchan) that accompany steam-cooked short-grain rice. Kimchi is served often, sometimes at every meal. Commonly used ingredients include sesame oil, doenjang (fermented bean paste), soy sauce, salt, garlic, ginger, pepper flakes  and gochujang (fermented red chili paste).
Grains have been one of the most important staples to the Korean diet. Early myths of the foundations of various kingdoms in center on grains.
During the pre-modern era, grains such as barley and millet were the main staples and were supplemented by wheat, sorghum, and buckwheat.
Rice is not an indigenous crop to , and it is likely millet was the preferred grain before rice was cultivated. Rice became the grain of choice during the Three Kingdoms period, particularly in the kingdoms of Silla and Baekje in the southern regions of the peninsula. Rice was such an important commodity in Silla that it was used to pay taxes. The Sino-Korean word for "tax" is a compound character that uses the character for the rice plant. The preference for rice escalated into the Joseon period, when new methods of cultivation and new varieties emerged that would help increase production.
As rice was prohibitively expensive when it first came to , it is likely the grain was mixed with other grains to "stretch" the rice; this is still done in dishes such as boribap (rice with barley) and kongbap (rice with beans).
Rice is used to make a number of items, outside of the traditional bowl of plain white rice. It is commonly ground into a flour and used to make rice cakes called tteok, of which there are over two hundred varieties. It is also cooked down into a congee (juk), or gruel (mieum) and mixed with other grains, meat, or seafood. Koreans also produce a number of rice wines, both in filtered and unfiltered versions.
Rice yields in now are about 3-4 tonnes per hectare, about half that in most countries, with soil degradation, lack of fertilisers, and limited mechanisation blamed.
Rice planted in are all most the tradictional japonica varieties.
The following table shows the area harvested (ha), the yield (kg/ha) and the production (tonnes) of rice in Democractic People’s Republic of from 1961 to 2010: