Rice cultivation in the Philippines


RICE CULTIVATION IN THE 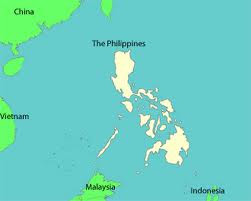 Introduction to Philippinean country and people

Population in increased from 1990 to 2008 with 28 million with 45% growth. The first official census in the was carried out in 1877 and recorded a population of 5,567,685. As of 2011, the Philippines has become the 7th most populated Asian country and the world's 12th most populous nation, with a population of over 98 million. It is estimated that half of the population resides on the .
An additional 12.5 million Filipinos live overseas. In 2007 there were an estimated 3.1 million. According to the United States Census Bureau, immigrants from the made up the second largest group after that sought family reunification. Some two million Filipinos work in the Middle East, with nearly a million in Saudi Arabia alone.
Multiple ethnicities and cultures are found throughout the islands. In prehistoric times, Negritos were some of the archipelago's earliest inhabitants. They were followed by successive waves of Austronesian peoples who brought with them influences from Malay, Hindu, and Islamicsocieties. Trade introduced Chinese cultural influences which remain to this day.
According to the 2000 census 28.1% of Filipinos are Tagalog, 13.1% Cebuano, 9% Ilocano, 7.6% Bisaya/Binisaya, 7.5% Hiligaynon, 6% Bikol, 3.4% Waray, and 25.3% are classified as other. These general headings can be broken down further to yield more distinct non-tribal groups like the Moro, the Kapampangan, the Pangasinense, the Ibanag, and the Ivatan.There are also indigenous peoples like the Igorot, the Lumad, the Mangyan, the Bajau, and the tribes of Palawan. Negritos, such as the Aetaand the Ati, are considered among the earliest inhabitants of the islands.
Filipinos generally belong to several Asian ethnic groups classified linguistically as part of the Austronesian or Malayo-Polynesianspeaking people. It's believed that thousands of years ago Taiwanese aborigines migrated to the from , bringing with them knowledge of agriculture and ocean-sailing, and displacing the earlier Negrito groups of the islands.
Eventually Chinese, Spanish, and American arrivals intermarried with the various indigenous ethnic groups that had evolved. Their descendants are known as mestizos. Chinese Filipinos number about two million. Other migrant ethnic groups who have settled in the country from elsewhere include Arabs, Britons, other Europeans, Indonesians,  Japanese, Koreans,  and South Asians.
The is a secular nation having a constitution separating the state and church. However, a large percentage of the Filipino people identify themselves as religious. More than 90% of the population are Christians: about 80% belong to the Roman Catholic Church while 10% belong to other Christian denominations, such as the Iglesia ni Cristo, the Philippine Independent Church, the Seventh-day Adventist Church, United Church of Christ in the Philippines, and Jehovah's Witnesses. The is one of two predominantly Roman Catholic countries in Asia, the other being East Timor.
Between five and ten percent of the population are Muslim, most of whom live in parts of Mindanao, , and the Sulu Archipelago—an area known as Bangsamoro or theMoro region. Some have migrated into urban and rural areas in different parts of the country. Most Muslim Filipinos practice Sunni Islam according to the Shafi'i school. Philippine traditional religions are still practiced by many aboriginal and tribal groups, oftensyncretized with Christianity and Islam. Animism, folk religion, and shamanism remain present as undercurrents of mainstream religion, through the albularyo, the babaylan, and the manghihilot. Buddhism, Taoism, and Chinese folk religion, are dominant in Chinese communities. There are also followers of Judaism and Baha'i.

The national economy of the is the 45th largest in the world, with an estimated 2011 gross domestic product (nominal) of $216 billion. Primary exports  include semiconductors and electronic products, transport equipment,  garments, copper  products, petroleum products, coconut oil, and fruits. Major trading partners include the , , , , , the , ,  , , and . Its unit of currency is the Philippine peso (₱ or PHP).

Makati in Metro Manila, the country's financial center.
A newly industrialized country, the Philippine economy has been transitioning from one based on agriculture to one based more on services and manufacturing. Of the country's total labor force of around 38.1 million, the agricultural sector employs close to 32% but contributes to only about 13.8% of GDP. The industrial sector employs around 13.7% of the workforce and accounts for 30% of GDP. Meanwhile the 46.5% of workers involved in the services sector are responsible for 56.2% of GDP.

The Philippines is a member of the World Bank, the International Monetary Fund, the World Trade Organization (WTO), the Asian Development Bank which is headquartered in Mandaluyong City, the Colombo Plan, and the G-77 among other groups and institutions.

The agriculture of the Philippines 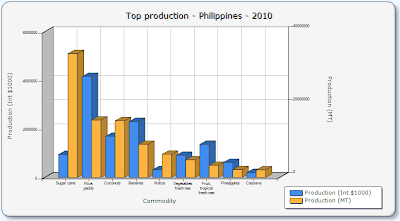 The rice cultivation in the Philippines

Rice is the staple food in the . The country, an archipelago, is the 8th top producer of rice in the world, however it is also the world’s top rice importer. After initial collaborations in the 1970s, the in 1973 registered a record harvest enabling the country to export some 90,000 tons of rice and maintain a 3-month buffer stock.
Rice production in the Philippines is important to the food supply in the country and economy. The country is the 8th largest rice producer in the world, accounting for 2.8% of global rice production. However, the country is also the world's largest rice importer in 2010. 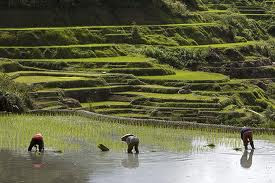 The Philippines' rice farmers
In the 1980s, however, rice production encountered problems. Average annual growth for 1980-85 declined to a mere 0.9%, as contrasted with 4.6% for the preceding fifteen years. Growth of value added in the rice industry also fell in the 1980s. Tropical storms and droughts, the general economic downturn of the 1980s, and the 1983-85 economic crisis all contributed to this decline. Crop loans dried up, prices of agricultural inputs increased, and palay prices declined. Fertilizer and plant nutrient consumption dropped 15%.
Farmers were squeezed by rising debts and declining income. Hectarage devoted to rice production, level during the latter half of the 1970s, fell an average of 2.4% per annum during the first half of the 1980s, with the decline primarily in marginal, nonirrigated farms. As a result, in 1985, the last full year of the Marcos regime, the country imported 538,000 tons of rice. The situation improved somewhat in the late 1980s, and smaller amounts of rice were imported. However, in 1990 the country experienced a severe drought. Output fell by 1.5%, forcing the importation of an estimated 400,000 tons of rice.
Rice is the most important food crop, a staple food in most of the country. It is produced extensively in Luzon, the Western Visayas, Southern Mindanao, and . In 2010, nearly 15.7 million metric tons of palay were produced.
In 2010, palay accounted for 21.86% of gross value added in agriculture and 2.37% of GNP. Per hectare yields have generally been low in comparison with other Asian countries. However, since the mid-1960s yields have increased substantially as a result of the cultivation of high-yielding varieties developed in the mid-1960s at the IRRI located in the . The proportion of "miracle" rice in total output rose from zero in 1965-1966 to 81% in 1981-1982. Average productivity increased from 1.23 tons per hectare in 1961 to 3.59 tons per hectare in 2009.
This "green revolution" was accompanied by an expanded use of chemical inputs. Among farmers surveyed in , the quantity of insecticide active ingredient applied per hectare increased tenfold from 1966 to 1979, from less than 0.1 kilogram per hectare to nearly 1.0 kilogram per hectare. But, by the mid-1990s, this figure had been cut in half. Since then, use has declined even more, and levels of insecticide use are now slightly below what they were before the Green Revolution began.
To stimulate productivity, the government also undertook a major expansion of the nation's irrigation system. The area under irrigation grew from under 500,000 hectares in the mid-1960s to 1.5 million hectares in 2009, almost half of the potentially irrigable land.
The , formerly the largest importer, has been promoting self-sufficiency. More irrigation means land can be planted earlier, allowing harvests before the typhoon season.
High prices of agricultural inputs, rising population, typhoons, and decreasing land area planted to rice, have all played roles in setting the nation back in its rice-self sufficiency efforts.
The raised its rice yields from 1.16 tons per hectare in 1960 to 3.59 tons per hectare in 2009. In 2009, Philippine rice yields were lower than the previous two years due to the damage done by the tropical storms "Ondoy" and "Pepeng". In 2007, average rice yield topped 3.8 tons per hectare and in 2008, was at 3.77 tons per hectare.
Average rice yield in the is also higher than of 's, the world's biggest exporter of rice, where yields over the last few years have been around 3 tons per hectare.
During the workplan meeting of IRRI and the in March 2010, the following are  identified as major areas of concern, and possible areas of collaboration:
-Government policies on fertilizer and seed subsidies.
-Proposed subsidy for seed producers and fertilizer manufacturers to lower costs of these inputs.
-Budget outlay if on-going and proposed researches.
-Generation of credible data and statistics.
-Need for technical working group for information needs.
-Varietal development strategy for hybrid rice .
-Organic rice.
Based on the World Rice Statistics, the harvested area of rough rice is 4,532,300 hectares (WRS, 2009); rough rice production is 16,266,420 tons (WRS, 2009); and rough rice yield of 3.59 tons/hectare (WRS, 2009). In 2010 is 4,354,160 hectares (FAOSTAT 2012); rough rice production is 15,771,700 tons (FAOSTAT 2012); and rough rice yield of 3.6222 tons/hectare (FAOSTAT 2012).
The government recorded that had imported 2.47 million tons milled rice in 2010.
Rice is such an integral part of history and culture in the that for many Filipinos rice imports are a source of national shame. Many reasons are typically advanced for the failure to achieve rice self-sufficiency-faulty government policy, corruption, conversion of rice land to other uses, backward rice farmers, deteriorating irrigation systems, and lack of farm credit, among others.
But all countries, including several rice exporters, complain about these problems. Although some of these problems are important, they do not explain why the imports rice.
For example, losses of land to urbanization are easy to see because they occur in populated areas, but the effects are small and are more than offset by cropland expansion elsewhere. In fact, rice area harvested in the has been at record highs during the past five years, reaching 4 million hectares for the first time in history.
As with other neighboring Asian countries, rice is staple food because rice is the main crop that employs 90% of the country's farmers. Being a tropical country with wet and dry season made it suitable for rice farming. Wet season (June to November) is the growing season for rice while the dry season (December to May) is harvest season. Rice, though prepared labor-intensively is easy to cook and prepare usually boiled and serve with various dishes ranging from fish to special dishes with Spanish and Chinese influence. Left-over rice is never wasted and is prepared into sinangag (fried rice) sauteed in garlic and served hot with local dishes. Sinangag is often served during breakfast with fried dishes such as eggs and fried meats e.g. sausage, tocino, corned beef and tapa. Sometimes, sinangag is turned into special meal with peas, onion springs and chorizo de .
Rice is also the main ingredients for prridge such as goto, lugaw, arroz caldo, and champorado which are great for breakfast, merienda and light food wile recovering from an illness. 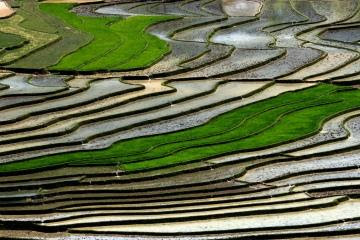 Rice field in the Philippines 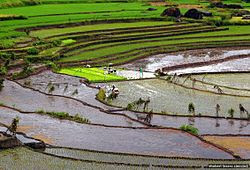 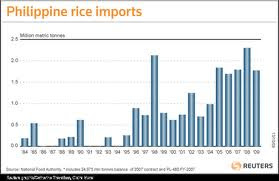 Rice import in the Philippines
The following table shows the Area (ha), the Yield (kg/ha) and the Production of rice in from 1961 to 2010: