Africa is the world's second-largest and second-most-populous continent, after . At about 30.2 million km² (11.7 million sq mi) including adjacent islands, it covers 6% of the Earth's total surface area and 20.4% of the total land area. With 1.0 billion people (2009), it accounts for about 14.72% of the world's human population.
The continent is surrounded by the Mediterranean Sea to the north, both the Suez Canal and the Red Sea along the Sinai Peninsula to the northeast, the Indian Ocean to the Southeast, and the  to the west. The continent includes  and variou sarchipelagoes. It has 54 fully recognized sovereign states ("countries").
straddles the equator and encompasses numerous climate areas; it is the only continent to stretch from the northern temperate to southern temperate zones.The African expected economic growth rate is at about 5.0% for 2010 and 5.5% in 2011.

The only Oryza glaberrima rice varieties cultivated in period 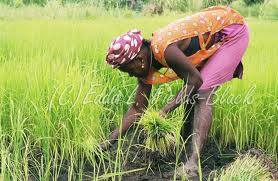 An African rice farmer
There are only two species of cultivated rice in the world: Oryza glaberrima, or African rice, and Oryza sativa, or Asian rice. African rice is believed to have been domesticated 2,000-3,000 years ago in the inland delta of the Upper Niger river, in what is now . Its wild ancestor, which still grows wild in , is Oryza barthii(formerly known as Oryza brevilugata).
The Oryza glaberrima species is grown in , and shows several negative characteristics with respect to the Asian rice species O. sativa, such as shattering, brittle grain and poor milling quality. More importantly, it consistently shows lower yields than O. sativa, but African rice often shows more tolerance to fluctuations in water depth, iron toxicity, infertile soils, severe climatic conditions and human neglect, and exhibits better resistance to various pests and diseases, such as nematodes, rice yellow mottle virus and the parasitic plants Striga.
The yield of Oryza glaberrima rice varieties are very low, only about 1.000 kg/ha.
In a long ancient period, the Oryza glaberrima species had been feeding all African population since 3.500 BC to 1600 before the Portuguese as early as the middle of the 16th century introduced the Oryza sativa species to .

Although it is not known with certainty when and where the first varieties of Asian rice O. sativa were first introduced into West Africa, the general consensus is that, beginning in the 16th century, the species spread and was adopted by peoples living in the Upper Guinea Coast who had previous experience growing the local African species.
There are many idies suggested that the Portuguese as early as the middle of the 16th century introduced the Oryza sativa species to .
Be cause of its yield is very low, only about 1.000 kg/ha, the Oryza glaberrima rice varieties have been gradually replaced by the Oryza sativa rice varieties.
At the present time, O. glaberrima is being replaced everywhere in by the Asian species, introduced into the continent by the Portuguese in the middle of the 16th century.
In the 1960s, many African farmers were producing enough rice to feed themselves. Since then, yearly imports have increased 8-fold to 4 million metric tons .
Tragically, food production in sub-Saharan is diminishing by 1% a year. Per capita food production in 1966–1968 averaged 119 kg per person per year. By 1982–1984, it had fallen to 98 kg per person per year and by 1993 to 91 kg per person per year In 1999 it climbed slightly to 94 kg per person per year.
Some West African farmers, including the Jola of southern , still grow African rice for use in ritual contexts.
From 1600 to 1970, both of O. glaberrima and O.sativa varieties had been grown in Afica. In wich the O.sativa varieties were grown in the good kinds of rice soil and O. glaberrima in the worse kinds of rice soil.
The folling table shows the rice area, yield and total rice production (rice paddy) on the year 1970 when the improment rice varieties not yet grown in :

The after improvement rice varieties introduced to period (1970-2000)

This period is important for rice increasing in both yield and total rice production.
In 2010, the Global Rice Science Partnership (GRiSP) was launched, which IRRI leads in Asia, the Africa Rice Center (AfricaRice) leads in Africa, and International Center for Tropical Agriculture (CIAT) leads in Latin America. It aims to "dramatically improve the ability of rice farmers to feed growing populations in some of the world’s poorest nations".
The folling table shows the rice area, yield and total rice production (rice paddy) on the year 2010 when the improment rice varieties not yet grown in :

The future of rices

New Rice for  ("NERICA")
New Rice for Africa ("NERICA") is an interspecific cultivar of rice developed by the Africa Rice Center (AfricaRice) to improve the yield of African rice varieties.The results of the NERICA Project, which is funded by the African Development Bank, the Japanese government, and the United Nations Development Programme, was a major agenda item at the Fourth Tokyo International Conference on African Development (TICAD-IV) in 2008. The new rice varieties, which are suited to drylands, were distributed and sown on more than 200,000 hectares during the last five years in several African countries, notably , , , and , according to the . Though this represents a major advance, it is still projected to fall short of meeting the growing demand for rice as a food staple.
The first Nerica variety was developed in 1994 by researchers at WARDA, using an Oryza sativa japonica variety (WAB 56-104) and an African Oryza glaberrima variety (CG 14).
They mature 30-50 days earlier than traditional varieties allowing farmers to grow extra crops of vegetables or legumes. They are taller thus making harvesting easier and they grow better on the fertile, acid soils that comprise 70% of the upland rice area in the region. In addition, there is 2% more body building protein in these new varieties than either their African or Asian parents.
Key features of the new varieties include:
-An increase in grain head size from 75-100 grains per head to 400 grains per head.
-An increase in yield from 1 tonne per hectare to 2.5 tonnes per hectare, yield increases to 5 tonnes per hectare with fertilizer use.
-Contains 2% more protein than their African or Asian parents.
-They are taller than most rices, which makes harvesting easier.
-They resist pests, and they tolerate drought and infertile soils better than Asian varieties.
The high productivity conferred on the NERICA strains by their Asian parents means that yields can be increased from the previous 1 ton per hectare to 1.5 tons without major inputs. With fertilizers and good care yields can double or even triple. Thus, the new rice holds great promise for a region in desperate need of decreasing hunger and increasing food security.
Some NERICA lines show high growth with low uptake of water and seem to be appropriate for long periods of cultivation in drought condition.
If 25% of rice farmers in ,  and  adopt the new varieties it is estimated that USD 20 million will be saved each year. The rices may also be valuable to rice producers in other dry environments, including areas of Latin America and .
AfricaRice Unveils Plan to Revolutionize Rice Production in by 2020

The pan-African agricultural research organization, AfricaRice, has unveiled a strategic plan aimed to help to be 90% self-sufficient in rice by 2020.
imports over 40% of its rice requirements, while rice consumption continues to rise in many African nations.  In recent months, rice exporters are focusing on this market as traditional Asian rice importers are aiming at self-sufficiency.
AfricaRice said that the product-oriented plan envisages that at least 10 countries will reach over 100% self-sufficiency in rice in around 10 years. The target is designed to reduce ’s dependency on rice imports and thus protect it from price and currency fluctuations. The research organization also believes that the rice industry can drive the economic growth in the continent. “Our new 10-year strategic plan shows clearly that rice sector development can become an engine for economic growth across the continent,” said AfricaRice Director General Dr. Papa Abdoulaye Seck.
Rice production in sub-Saharan Africa (SSA) is targeted to increase from 18.4 million tons in 2010 to 46.8 million tons by 2020, as per the strategy. The plan is projected to result in income rises that will lift a minimum of 11 million people in the rice industry above the $1.25 poverty line by 2020. Increased food security will also mean that about 5.6 million undernourished people will reach caloric sufficiency.
“As an association of African member countries and an international Center of the CGIAR Consortium, AfricaRice is ideally positioned to coordinate the implementation of the new  strategy in close collaboration with its partners in order to boost Africa’s rice sector and to achieve the ‘rice revolution’ the continent so badly needs,” said Dr. Seck. (Source: http://oryza.com.)
References
1-"NERICA COMPENDIUM". WARDA. 2006. Retrieved 2008.
2-"Lowland NERICA". WARDA. 2006. Retrieved 2008-07-07.
3- NERICA - new rice for West Africa-www.scienceinafrica.co.za/nerica.htm
4-GRAIN — Nerica: a 'wonder' rice? www.grain.org/article/entries/752-nerica-a-wonder-rice.
5-Farmers embrace African 'miracle' rice-www.un.org/en/africarenewal/vol17no4/174rice.htm.
6-http://www.africarice.org/publications/StrategicPlan/AfricaRice_Strategic_Plan_2011-2020.pdf
7-http://en.wikipedia.org/wiki/New_Rice_for_Africa From Wikipedia, the free encyclopedia
8- http://oryza.com/Rice-News/14454.html By Oryza News on March 02,2012
Edited by Kỹ sư Hồ Đình Hải vào lúc Thursday, April 12, 2012