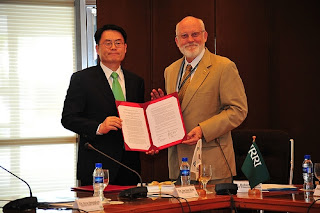 Rice belongs to the genus Oryza and has two cultivated and 22 wild species. The cultivated species are Oryza sativa and Oryza glaberrima. Oryza sativa is grown all over the world while Oryza glaberrima has been cultivated in for the last ~3500 years.
Rice is grown under many different conditions and production systems, but submerged in water is the most common method used worldwide. Rice is the only cereal crop that can grow for long periods of time in standing water.
About 57% of rice is grown on irrigated land, 25% on rainfed lowland, 10% on the uplands, 6% in deepwater, and 2% in tidal wetlands .
Oryza sativa, commonly known as Asian rice, is the plant species most commonly referred to in English as rice. Oryza sativa is the cereal with the smallest genome, consisting of just 430 Mb across 12 chromosomes. It is renowned for being easy to genetically modify, and is a model organism for cereal biology.
Oryza sativa contains two major subspecies: the sticky, short grained  japonica  or  sinica  variety, and the nonsticky, long-grained  indica  variety.  Japonica varieties are usually cultivated in dry fields, in temperate East Asia, upland areas of Southeast Asia and high elevations in South Asia, while indica varieties are mainly lowland rices, grown mostly submerged, throughout tropical .
Mainstream archaeological evidence derived from palaeoethnobotanical investigations indicate dry-land rice was introduced to  and  some time between 3500 and 1200 BC. The cultivation of rice in and during that time occurred on a small-scale, fields were impermanent plots, and evidence shows that in some cases domesticated and wild grains were planted together. The technological, subsistence, and social impact of rice and grain cultivation is not evident in archaeological data until after 1500 BC. For example, intensive wet-paddy rice agriculture was introduced into Korea shortly before or during the Middle Mumun Pottery Period (c. 850–550 BC) and reached Japan by the final Jōmon or initial Yayoi periods c. 300 BC.

Japanese rice not only be in Japan

Japanese rice is commonly called for japonica rice varieties that are now planted in the northeast , and some areas in Europe and . This is a short-grain variety of rice (Oryza sativa var. japonica) which is characterized by its unique stickiness and texture.It also comes in a variety called mochigome (sticky rice) which is used for making  mochi. Rice begins as brown rice, genmai , which may then be polished by a machine (seimaiki), in which case it is sold as ready-polished or white rice, hakumai .
Sprouted brown rice hatsuga genmai is also sold in smaller quantities. It has a softer texture than brown rice and a pleasant fragrance, yet retains the health benefits of brown rice. Most supermarkets in  sell ready-polished rice in 10 kg, 5 kg, and smaller bags. Brown rice is usually sold in 30 kg bags. Japonica should not be confused with Jasponica rice – a cross between the long-grained and fragrant Thai Jasmine rice and the sticky, soft Japanese rice.
Rice is cultivated throughout . In , 's northernmost island, hardier varieties are grown. In , the Japanese mainland, varieties such as koshihikari are grown.
Rice is eaten in several ways in , as plain rice "gohan" (lit. "cooked rice" or "meal of any sort") or often with a topping of furikake , nattō or nori , as well as for sushi . Leftover rice is often reused as ochazuke (rice with green tea) or chāhan (fried rice).
Rice is also used to make alcoholic drinks like sake , rice vinegar, snacks such as senbei , rice crackers, and agemochi.
Traditionally, rice was eaten at every meal in ; most modern rice cookers can be set ahead by a timer, so that rice will be ready for the morning meal. The rice cooker can also keep rice moist and warm. Rice kept warm like this remains edible for several hours, so that rice need be made only once per day.
Prepared rice is usually served from the rice cooker into a chawan, or rice bowl.
After cooking, rice may also be held in a covered wooden box called an ohitsu.
Brown rice can be sprouted at home if it has not been irradiated or otherwise altered.

Arborio rice and Baldo rice are cultivars of Japonica grown in  and other Mediterranean countries. Idly rice- the short grained and stout variety grown in Tamil Nadu () closely resembles japonica.
Two major subspecies of rice (Oryza sativa L.), indica and japonica, are widely recognized. Japonica rice, which includes temperate and upland (tropical) cultivars, has been less well characterized by DNA markers than indica rice.
The present study was undertaken to quantify genetic diversity with random amplified polymorphic DNA (RAPD) markers in a sample of 134 predominately japonica cultivars and two wild species (O. nivara Sharma et Shastry and O. rufipogon ).
Ten oligonucleotide primers produced 30 bands showing clear polymorphisms. The indica and japonica cultivars were classified into separate groups by cluster analysis. Clustering was less pronounced within the japonica group. Tropical japonicas (including long-grain types) usually clustered together but no firm boundary was found between the tropical and temperate types.
Japanese rice (Oryza sativa var. japonica) is a short-grain variety of rice that grows well in both tropical and cool-weather climates. Prized in Japanese cuisine for its nutty fragrance and soft texture, its sticky consistency makes it a staple in dishes such as sushi and mochi. Because rice growing is a time- and labor-intensive process relative to the amount of yield, rice is typically grown commercially in large paddies.
Japonica rice is typically grown in temperate countries like . Because it is a high-quality and a high-yielding variety, japonica rice fetches a higher cost than the tropically grown indica rice. Farmers who can grow japonica rice locally stand to earn greater return on their incomes. Consumers, on the other hand, can afford to enjoy this semi-glutinous rice at affordable prices, rather than paying more for the imported japonica

Developing japonica rice for the tropics